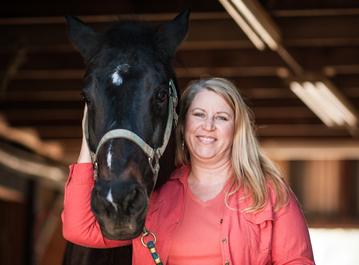 Melinda with her horse Midnight Clover

In addition to her love of music, Melinda is an avid equestrian and animal lover. She has lived on 4 continents, traveled extensively, and is fluent in French.  One of her favorite places is Provence, in the South of France. 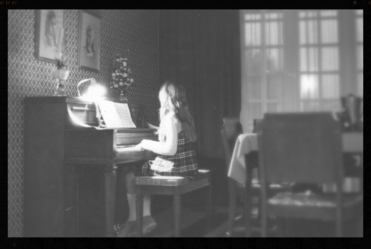 Melinda at the piano her parents purchased.
- St. Martin-de-Crau, France, 1971

As a five year old child, I began asking my parents for piano lessons.  Unbeknownst to me, they had just painstakingly saved up $500 for new furniture to "clothe" our naked living room.  But instead of filling the room with sofas and coffee tables like everyone else on the block, they decided instead to redirect all the money they had saved to buy only a single item - a piano - which allowed me to begin taking piano lessons.   They found a teacher and I started my first piano lessons on Saturday mornings shortly thereafter.  After a number of piano teachers on various continents, and more than  forty years later, I am not only still playing  but  also teaching others to play - and sing - as my chosen profession of over twenty years.  The purchase of that piano (pictured to the left) was, without a doubt, one of the best investments my parents ever made for my future.  I still play that piano when I visit them at their home, and I will be forever grateful for my parents' sacrifice and their desire that my sisters and I  have music as an integral part of our lives.

A few years later, my parents also purchased a guitar.  They were both learning to play by watching  instructional shows on PBS,  my mother learning folk guitar, my father, classical... and I watched too.  One evening while my parents were on a date, I decided  to teach myself to play guitar.  By the time they arrived home, I had learned two songs.  Eventually, guitar lessons ensued.  I brought that guitar everywhere I went - camp, friends' houses, even South Africa.

Later in high school, as I began working, I decided to start voice lessons, and was proud to pay for them myself.  I found a great teacher that lived a three minute walk from my front door.   Mrs. Mixson was amazing - she even  had students on Broadway.  I really enjoyed  my lessons, but they were short-lived as I was off  to college by the fall of that year.

Initially, I decided that music would not make a good career, so instead I considered Marine Biology, Physical Therapy, Veterinary Medicine, Education, Advertising and Marketing, Law - anything but music.  But nothing felt quite right until I finally took a music class at American River College for personal enrichment.

My first class was Music 22A, a Beginning Voice class, taught by Perla Warren, her reputation as an excellent musician and instructor  was equaled only by her reputation of being as tough as nails and terrifyingly intimidating.  While I found all that to be true,  I  adored  her class, and thrived.  I returned the following semester for Music 22B, and added a piano course as well.  While singing my first solo midterm in Italian, Mrs. Warren stopped me halfway through.  She asked, "What have you done to your voice?"  (As if singing your first solo in Italian, and being the first student asked to sing isn't intimidating enough.)  I had no idea how to respond.  She pressed again, "What have you done to your voice?" but this time she added "...this is not the same voice that I heard last semester."  I finally managed a response and shared that over the summer I took semi-private voice lessons  with some of the students from last semester's voice class. What she said next, was to literally change the course of my life: she said, "I am having auditions for my Chamber Choir tomorrow; if you are not there to audition, I will come  find you."   Needless to say, I did audition for her, and that year in Chamber Choir, with Perla Warren, I fell in love with music.  It was hard not to with her excellent instruction and  a year that culminated in singing the Brahms Requiem in Ireland with John Alldis.  I declared music as my major, finally.   Not long after, I transferred to  UC Davis were I had the opportunity to study under world class musicians and finished with a Bachelor's degree  in Music.

Since graduation, the last 20+ years have been full of more amazing  musical opportunities:  Church Music Director/Worship Leader positions for 5 different churches, Choral Conductor, Band Leader, Musical Theater Director, Music Theory Instructor, vocal and piano soloist, composer,  and arranger.  My two greatest loves in music are leading worship and teaching  voice and piano.  I teach music because I love it, not because I have to.  The privilege of helping another generation fall in love with music, like I did, is a truly sublime occupation!